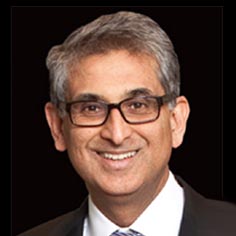 He is the Co-Founder and Chair of Scale Up Ventures and Chair of the Digital Media Zone Advisory Council and is CEO in residence at Ryerson University. Mr. Mohamed serves on the Board of TD Bank Financial Group and Trilogy International Partners. He is also on the Board of Tennis Canada, UHN Toronto General & Western Hospital Foundation and is a founding Board Member of Next 36/NEXT Canada. Mr. Mohamed was named by Bloomberg as one of the world’s most successful immigrants and in October 2013 was honoured by the UN Association in Canada at their 2013 Global Citizens Dinner.